Around the World in Eighty Days

Home News Around the World in Eighty Days 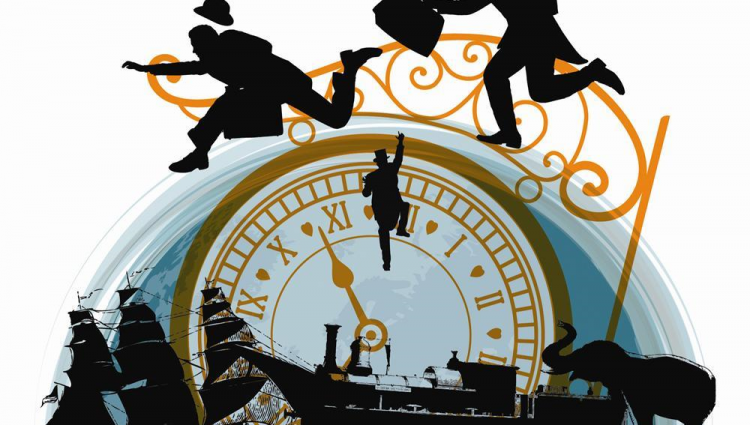 Whilst international travel is difficult at this time due to the impact of the Covid-19 pandemic, sitting at my desk looking out a remarkably china blue April sky, I thought it would be nice to reflect back to a time when the world was opening up to international travel. In 1872 Jules Verne wrote ‘Around the World in Eighty Days’.

What inspired this story and made such a trip possible were the three significant changes to world transport infrastructure that occurred in between 1869 and 1870 that made a tourist-like around-the-world journey feasible for the first time: the First Transcontinental Railroad  in the United States (1869), the Great Indian Peninsular Railway (1870), and the opening of the Suez Canal (1869).

For those of you who don’t know the story, Phileas Fogg  gets involved in an argument at his club, the Reform Clubover an article in The Daily Telegraph stating that with the opening of a new  railway section in Indian, it is now possible to travel around the world in 80 days. He accepts a wager for £20,000 (£2,242,900 in 2019)[3][4], half of his total fortune, from his fellow club members to complete such a journey within this time period. With Passepartout, his valet accompanying him, Fogg departs from London by train at 8:45 p.m. on 2 October; in order to win the wager, he must return to the club by this same time on 21 December, 80 days later.

In 1956 the story was made into a film called Around the World in 80 Days , by United Arists. The film won 5 Academy Awards including Best Picture.

You may be wondering what all this has to do with Killick Martin & Company Ltd. Well Edward Boustead hwas a shareholder in eleven of Killick Martin & Company’s ships and was the companies most significant investor in its early years. He was also the great grandfather of David Niven the leading actor playing Phileas Fogg in the 1956 film.

Another connection between the story and Killick Martin & Company is the character of ‘Aouda’ an Indian Princess married against her will to the Hindu ruler of Bundelkhand. In the story Auoda is a Parsi merchants daughter connected to Sir Jamsetjee Jejeebhoy.

and was purchased by Edward Boustead  (David Niven’s great grandfather) in 1867 who that month sold shares in the vessel to Killick Martin & Company and jointly owned it with them for 11 years until 1878.

Sir Jamsetjee Jejeebhoy https://en.wikipedia.org/wiki/Jamsetjee_Jejeebhoy  was a Parsi Merchant, was first bestowed a knight  in 1842, and a baronet in 1857 by Queen Victoria , the first distinction of this kind conferred upon a British subject of India.

Auoda is player by Shirley MacLaine in the film.

Apart from space travel the present fastest record set for the circumnavigation of the world was in 1995, set by an Air France Concorde that departed and returned to New York (JFK).

The flight under the FAI (Fédération Aéronautique Internationale) rules, which permit flights that exceed the length of the Tropic of Cancer or Capricorn (36,787.6 km or 22,858.8 miles), was one of 31 hrs 27 mins 49 secs by Captains. Michel Dupont and Claude Hetru). The route was from JFK airport in New York, USA eastbound via Toulouse, Dubai, Bangkok, Guam, Honolulu and Acapulco on 15 and 16 August 1995. There were 80 passengers and 18 crew on board flight AF1995.

The technical crew was headed by Michel Dupont and Claude Hetru and a Police chief, approved by the International Aeronautical Federation was on board during the flight to officialise the record. The plane flew at its usual altitude of approximately 18000 m and at a cruising speed of Mach 2.

Engaging customers in a new world