May 2019 marks two events commemorating the life of Captain James Killick. The first being the updating of Wikipedia with the addition of a biography on James Killick and the second, an exhibition and family day being held at his historic family home in Cheam, Surrey by Sutton Cultural Services. A extract from his Wikipedia biography and details of the exhibition are given below

Captain James Killick was born in the Surrey village of Cheam on the 26th August 1816. His family had lived in Cheam since 1741 when John Killick obtained a lease on a late fifteenth century house known as Whitehall.

The ships in which James Killick served between 1837 and 1840 are unknown, but he is recorded by the Canton Press as being in command of the barque ‘Arun’ in Canton during December 1841. ‘Arun’ was built in Littlehampton, England in 1840, so its most likely that he had been appointed Master for her outward journey during 1841.

On 7th May, 1845 James Killick is recorded as taking command of ‘John Dugdale’ built in Whitehaven in 1834. He relinquished his command of the vessel in 1851. During this time Captain James Killick made frequent journeys between China and the U.K. an example of two of these passages are:-

During 1849 James Killick obtained his master’s certificate from Liverpool Custom’s Authorities, and in 1852 he exchanged it under new regulations for a Board of Trade certificate of competency in London.

Captain James Killick took command of a new ship. The ‘Challenger’  which was launched on the 23rd December and departed on her maiden voyage on the 21st February 1852.

Challenger was build by Richard Green and Henry Green at the Blackwell Yard.

She was the 291st ship built by the yard and was a remarkable departure from the previous ships produced. In 1850 the American clipper ship ‘Oriental’ visited West India Docks, the largest clipper ship to visit London and the Admiralty was given permission to take her lines, and this was done by Messrs Waymouth and Cornish, both Lloyd’s Surveyors, in the dry dock at Green’s Yard in Blackwell. This is probably the reason that it was said that Challenger’s design was inspired by and had a close resemblance to the Oriental’s.

Under Captain James Killick’s command Challenger loaded tea at Shanghai on 28th July 1852 and set for London, calling in at Anjer, where she met the American ship, Challenge, which was set for London, with a cargo of tea from Canton. The Challenge was a larger vessel of 2,000 tones, an extreme clipper built expressly for speed and capacity, and was the largest clipper built by the Americans to date. A race to London was commenced by the two vessels, the smaller British clipper arriving in London two days ahead of her larger rival. The news of the British win inspired the efforts of British owners to compete with the Americans and capture the China tea trade.

On the 8th August 1853 Captain James Killick commenced another race with Challenger against the Amercian clipper Nightingale from Shanghai. Challenger reached Deal on the 26th November, 2 days earlier than Nightingale. 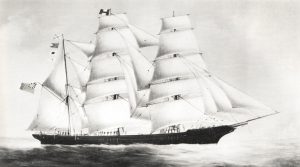 In 1861 Captain James Killick together with James Henry Martin created a business partnership to own and operate ships called Killick Martin. Killick was the senior partner and his seafaring background gave him the necessary experience to manage the ship owning side of the business. James Martin, twenty years younger than Killick, had previously worked for Phillips, Shaw & Lowther, which later changed its name to Shaw, Lowther and Maxton (owners of famous clipper ships like Ariel  and Titania) concentrated on the running of the office and securing of cargo.

Basil Lubbock and David MacGregor in their various publications mention in his later life Captain James Killick became affectionately known as the ‘China Bird’ and the ‘Admiral’ and when he passed away in Margate, Kent on 29th October 1889 some of his obituary’s referred to these ‘nick names’ and show the high regard and respect which his friends and colleagues held for him. He passed away just two years after his retirement and three years after the sale of his last vessel Wylo.

Sutton Cultural Services, part of Sutton Council, have an archive on Captain James Killick and are holding an exhibition on his life at his former family home in Whitehall, Cheam, Surrey. Whitehall is English Natural Heritage listed was restored by Sutton Council in 2018 with the aid of a £1.9 million grant from the National Lottery. 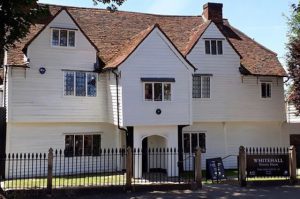 The Captain Killick exhibition and family event is being organised by Sutton Cultural Services, Sutton Council and is taking place at Whitehall, Cheam between the 25th May and the 2nd June 2019. Tickets are free, but must be purchased in advance from Evenbrite 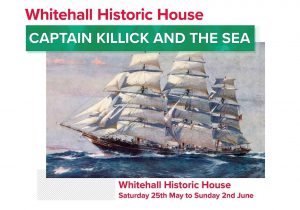