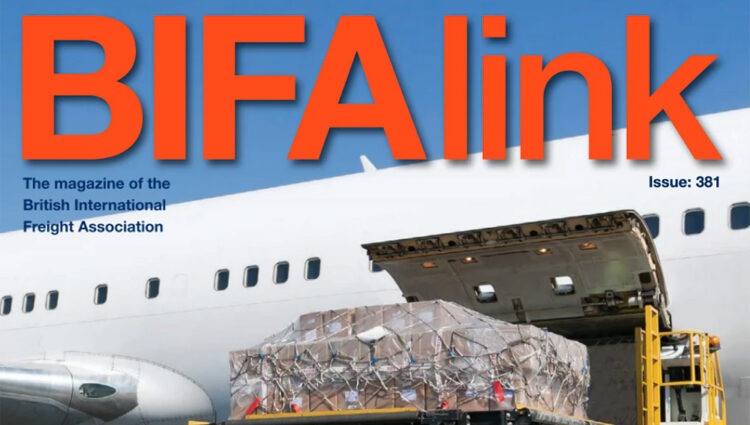 Killick Martin are featured in this month’s edition of BIFA Link, the magazine produced by the British International Freight Association (BIFA) covering issues of importance for the logistics and supply chain industry.

The article followed up on our fabulous win at the BIFA awards ceremony in January, where we were privileged to accept the coveted European Logistics Award for 2021.

You can get access to the magazine HERE, but the content of the article is as follows:

The winner of 2021’s BIFA European Logistics Award was Killick Martin & Company, which reacted quickly to provide a ‘hyper-care’ solution for a key customer facing new challenges in the wake of Brexit.

Killick Martin secured a contract at the end of 2020 to provide ocean and air freight services for one of Europe’s largest producers of performance additives, water treatment and flame retardant chemicals – many of them hazardous. The agreement covered 1,000 shipments per annum and was all set to begin in January 2021.

According to managing director Paul Gallagher, each product line requires full technical specification plus specialist documentation, handling and packing. Many are subject to European ADR regulations.

However, he said: “The biggest problem was that we had spent 14 months preparing for this contract incorporating the impact of Brexit changes and, virtually at the last minute, the requirements changed.”

The Brexit agreement created a harder border than hoped, he explained. Meanwhile, to protect its commercial position, the client had agreed to new terms of shipment for every customer and supplier, which meant that it was responsible for taxes and Customs formalities in the EU. Having changed terms to DDP for exports and Ex Works for imports, it suddenly found many established supply routes had become much more complex – and called on Killick Martin to handle all of its European logistics business: around 3,000 shipments per annum.

Solutions
Killick Martin made a plan for each flow of traffic, according to country, export port, destination and transport mode. Instructions of post-Brexit processes were provided to all key EU customers, product suppliers and stakeholders. In order to cope with the sudden threefold increase in volumes, the team set up some routings with providers who would deal with the client directly. Killick Martin handled the rest (including the more sensitive shipments) itself using high-performance carriers.

“We introduced a three-person ‘hyper care’ team that collectively provided 24/7 availability and service to our client and its EU customers and suppliers, and a Customs team with outsourced capabilities throughout Europe,” Gallagher said.

A complication of Brexit – exacerbated by COVID-19 – was the shortage of truck drivers either based in the UK or willing to risk long Customs delays by taking work on Europe-UK routes.

“On many occasions, we were able to circumnavigate driver issues by convincing the overseas customer either to combine orders, or to increase the size of an existing order,” Gallagher said.

“By increasing the volume of certain shipments, we introduced more flexibility, with full load traffic enabling us to use unaccompanied services including shortsea and railfreight movements.”

Killick Martin also identified and eliminated waste in the supply chain. “We smoothed flows by trying to avoid bottlenecks at points where the transport mode changes. If multiple ISO tanks were loaded onto a vessel arriving on a Friday evening or Saturday, nothing would happen with them until the following Monday; and if they all turned up on site at once, they would not get tipped because everything has to dovetail with other activities. Meantime, there would be a lack of empties back at the load point and delays at a railhead.”

Gallagher added: “We introduced SharePoint sites so everyone can monitor where their product sits in the supply chain and we take early action or contingencies. It is not rocket science – between us, we already had the software and the will to make it work, so we just had to create trackers.”

Gallagher attributes Killick Martin’s ability to overcome challenges to two key factors. “It is a mixture of being prepared to put the work in and having open communication channels between willing partners. I think we have built a lot of trust that way,” he said.

Asia Voyages Are Getting Longer But Who Is Really To Blame