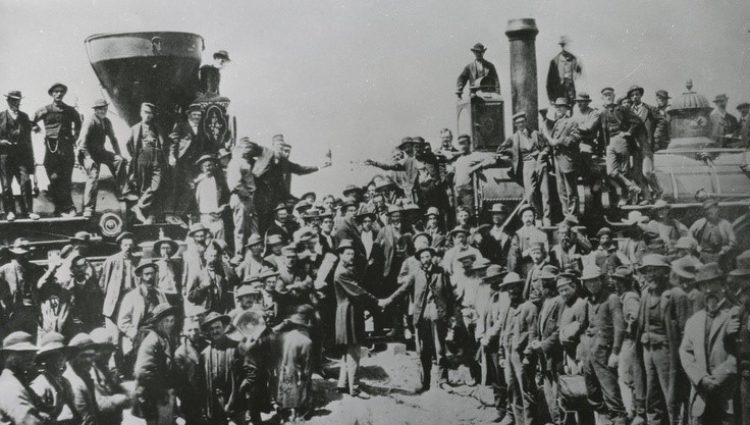 Along with Cutty Sark featured in our last blog the First Transcontinental Railroad is also celebrating its 150th Anniversary. The 1,912-mile continuous railroad line completed on the 10th May 1869 connecting the existing eastern U.S. rail network at Omaha, Nebraska/Council Bluffs, Iowa with the Pacific coast at the Oakland Long Wharf on San Francisco Bay.

Before the advent of the transcontinental railroad, a journey across the continent to the western states meant a dangerous six month trek over rivers, deserts, and mountains.  Alternatively, a traveler could hazard a six week sea voyage around Cape Horn, or sail to Central America and cross the Isthmus of Panama by rail, risking exposure to any number of deadly diseases in the crossing.  Interest in building a railroad uniting the continent began soon after the advent of the locomotive.

The railway was built in various stages between 1863 and 1869 and when the final two sections were joined a ceremony known as the ‘Last Spike’ or ‘Golden Spike’ was held to mark the completion of the railway and joining of the Atlantic and Pacific oceans by rail. The six-month trip to California had been reduced to two weeks.

During this period of time transportation links around the globe were being transformed. In November 1869 the Suez Canel also opened significantly reducing transit times between Asia and Europe . Three steam ships of the Blue Funnel Line used both routes (round the Cape of Good Hope and via the Suez Canal) between Europe and Asia from 1866 to 1870. Upon switching from round the Cape to through the Suez Canal, these same ships saved between 10 and 12 days. Killick Martin were agents for Blue Funnel Line in London.

To mark the 150th Anniversary Union Pacific have restored Big Boy No. 4014, which will join with Living Legend No. 844 together in a public display for the first time May 9 in Ogden, Utah, during Union Pacific’s celebratory event. The festivities include recreating the iconic photo taken May 10, 1869, when the last spike was tapped into place at Promontory Summit, creating America’s first transcontinental railroad.

The Big Boy’s return follows more than two years of restoration. Of the eight still in existence, No. 4014 is the world’s only operating Big Boy locomotive, and the largest steam locomotive in the world.

A Big Boy locomotive along with its tender weighed about 604 tons and measured more than 132 feet in length. It had a maximum power capacity of more than 6,000 horsepower and could haul a 3,600-ton train. They were designed to haul heavy freight trains. This compares to one of Killick Martin’s famous clippers ships ‘Challenger’ which weighed 649 ton, and was 174ft long.

Today’s heavy freight trains in the USA are hauled by multiple diesel units with an approx. output of 6,000 bhp each. With the more widespread use of containers in the 1970’s by ocean carriers, rail operators need to adapt to moving containers. This process was revolutionised once again by Malcom McLean who came up with the idea of the first double-stack inter-modal car in 1977. It was slow to become an industry standard, then in 1984 American President Lines started working with the Southern Pacific (now part of Union Pacific) and that same year, the first all “double stack” train left Los Angeles, California for South Kearny, New Jersey, under the name of “Stacktrain” rail service. Along the way the train transferred from the Southern Pacific to Conrail. It saved shippers money and now accounts for almost 70 percent of inter-modal freight transport shipments in the United States, in part due to the generous vertical clearances used by U.S. railroads. These lines are diesel operated with no overhead wiring.

Double stacking is also used inAustralia between Adelaide, Parkes, Perth and Darwin. These are diesel only lines with no overhead wiring. Saudi Arabian Railways use double-stack in its Riyadh–Damman corridor. Double stacking is used in India for selected freight-only lines.

The UK has a great network of container freight trains from all our major ports. If you are interested in discussing multi-modal options, including rail freight in the UK, or worldwide please contact your nearest Killick Martin office.

Speed Machines - Running with the Wind